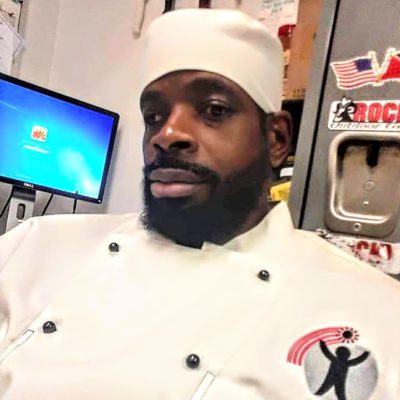 “Before I came to Ready, Willing & Able, I was working in the dishrooms of restaurants,” says Mike Jones. “Now, pretty much anywhere I go, I get hired at the Senior Chef level.” And Mike’s passion for cooking spans beyond a regular work day; in his spare time, he reads up on new recipes, and is always working to improve his skills in the kitchen.

It hasn’t been an easy road for Mike—he was arrested for the first time at 19 years old, and has faced countless obstacles before, during, and after incarceration. When he came to The Doe Fund, he still faced challenges, but this time, he was working towards a goal.

“When it was time to pick an occupational training track, I went straight for Culinary Arts,” Mike recalls. “That’s what I do, so it was a no-brainer.”

In the Culinary Arts track, Mike learned the ins and outs of the food industry, from recipes, to cooking terms, to food safety. “I’ve done everything you can do in this field,” he says. He prides himself on his thorough preparation and work ethic, stating, “I like to stay ahead of the task list, get to work early, and prepare as much as I can.”

For the past few years, Mike has been employed by a jewish catering company, where the way that food is handled and prepared is crucial. “You have to be careful with using different knives and plates for different kinds of food,” he explains. “And jewish cuisine is different; I wasn’t familiar with it before, and it’s interesting to study this other type of cooking.”

Now, Mike is waiting to start a new position at an assessment shelter. Some might be intimidated by the prospect of making food for so many people at once, but Mike knows he can handle it; he used to make lunch and dinner for 190 people by himself when he worked at the Department of Homeless Services.

“I’m very confident in my abilities and what I’ve learned because I put the work in,” he says. “I’m looking forward my next position; there’s always something new to learn and it’ll just make me a better cook.”